As defined by the World Health Organization (WHO) 1, adolescents and young people are persons between 10 and 24 years of age. This age is characterised by rapid physical growth and development as well as sexual maturation. According to Dehne et al6, youths and adolescents are most at risk of contracting HIV/AIDS and other sexually transmitted diseases. It is a period that can be marked by the need to try out new things such as sex, experiment with injectable drugs as well as other drug types. As a result of engaging in these high risk behaviour, there has been an upsurge in the prevalence of HIV/AIDS and other sexually transmitted diseases in adolescents. Taking into consideration that most adolescent become sexually adventurous at this age and the attendant health risk, it is therefore paramount to provide sexual and reproductive health information and services to them. However, many adolescents and young persons are limited by their social and economic status therefore access to these information and services is constrained. To compound this, estimates from WHO show that majority of adolescents who are engaging in risky sexual behaviours live in sub-Saharan Africa, a region with high burden of HIV3.

HIV/AIDS remains a growing public health concern worldwide. Over the past three decades, HIV has established itself in every age group. There is increasing concern in the growing disproportionate share of adolescent and young people living with HIV/AIDS worldwide. There are about 1.8 billion adolescents and young people worldwide which is a quarter of the world’s population 4. Estimates from United Nations Children’s Fund (UNICEF) in 2016 show that about 2.1 million adolescents between the ages of 10 and 19 were living with HIV worldwide 3. In 2015 alone, of the 2.1 million persons that were newly infected with HIV, 670,000 were young people between the ages 15 to 24, and 37% of these were adolescents between the ages 15 to 193. 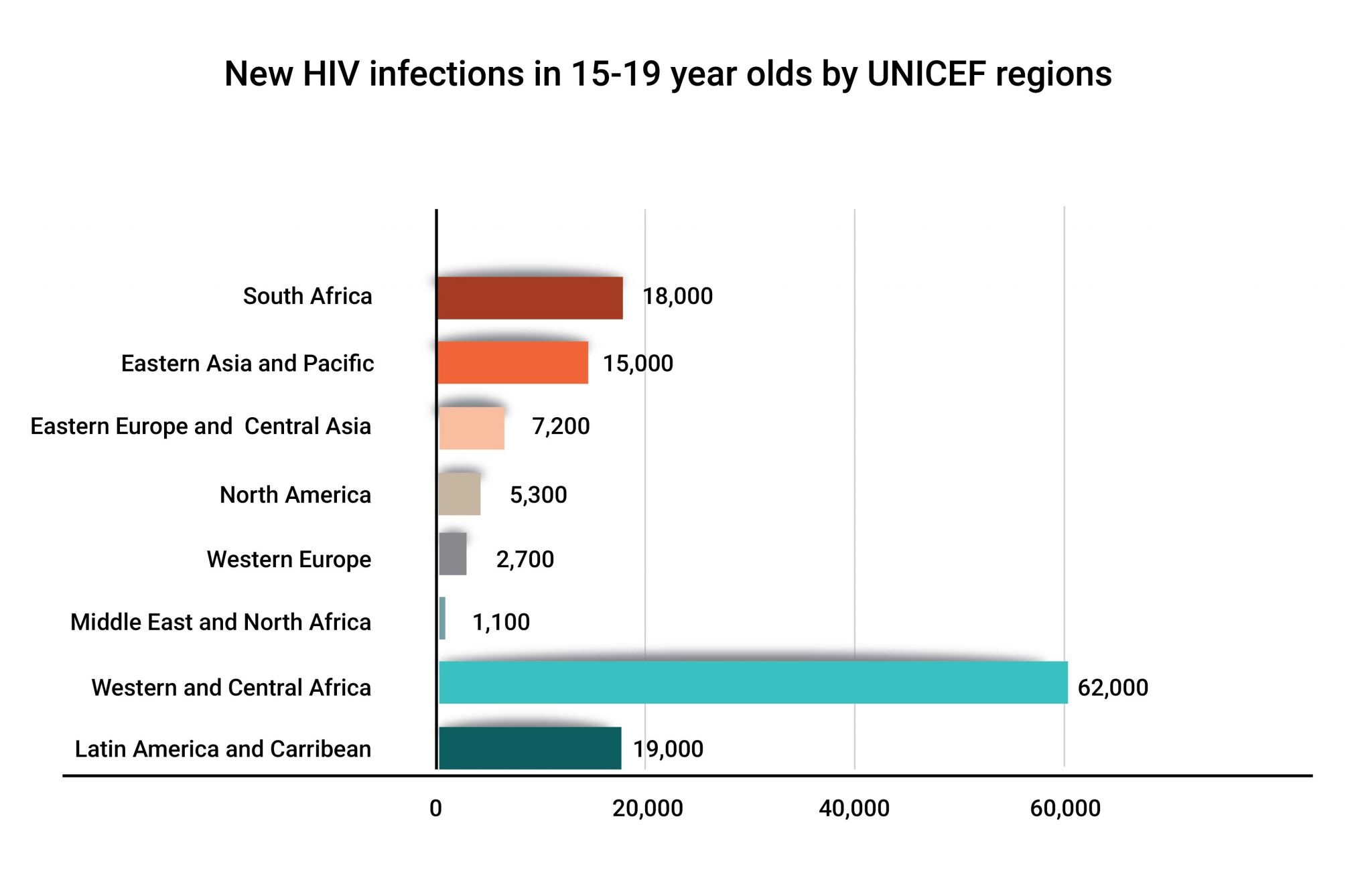 An undeniable observation is the fact that estimates of new HIV/AIDS infections among adolescents are more prominent in Sub-Saharan Africa – the region most affected by HIV. AIDS is the number one killer of adolescents and young adults in Africa 2. However, recent data show that only 13 per cent of adolescent girls and 9 percent of adolescent boys aged 15-19 have been tested and received their results for HIV in the past 12 months 3. Furthermore, over the past decade AIDS-related deaths have increased disproportionately in adolescents while decreasing among other age groups 5.

Nigeria follows South Africa as having the second largest HIV burden in the world with a prevalence28. This prevalence rate differs by region. In the South-South region, the prevalence stands at 5.5% which is the highest compared to other regions, while The South-East region has the lowest with a prevalence of 1.8%27. Adolescents and young people make up 31% of the entire population of Nigeria. Adolescents between the ages of 10-14 make up the largest proportion compared to other age groups 27.  Data from the Nigeria AIDS Control Agency (NACA) put the prevalence at 4.2% for young people aged 15 to 2411. Recent estimates put the number of adolescents- aged 10-19 years- living with AIDS to be 160,000. National data also suggests that 40 percent of all reported new cases of HIV occur in young persons aged 15 to 24 which is the highest when compared to other age groups 7. 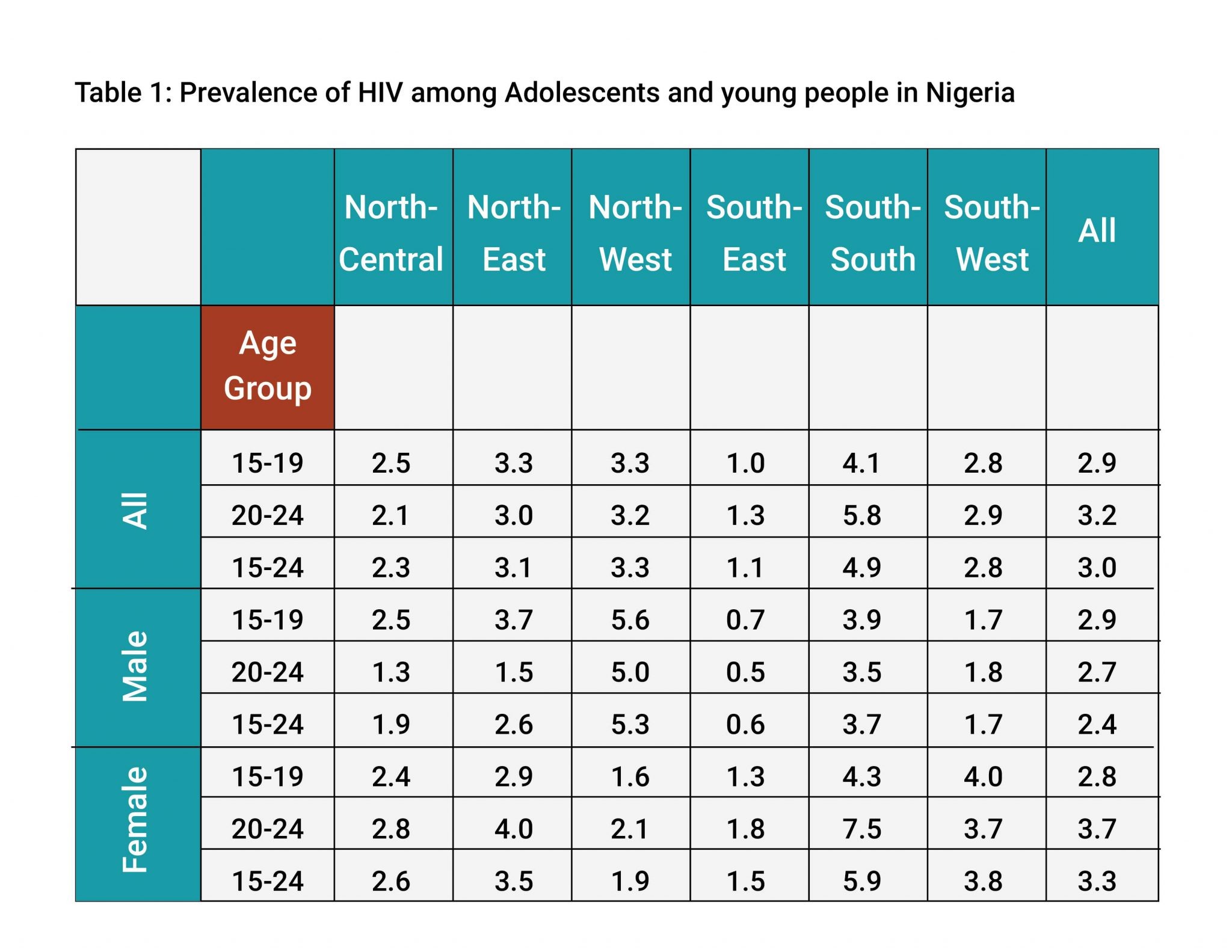 Table 1 shows the HIV prevalence by regions in Nigeria. It is apparent from the table above that the prevalence of HIV/AIDS among adolescents and young people differ remarkably by regions.

Awofala and Ogundele29 suggests that these differences in prevalence rates may be because of factors such as levels of education, religion, socioeconomic status and cultural diversity. The prevalence of HIV also varies markedly by gender, as young women are more infected with HIV than their male counterparts. This is especially true in the South-South region where young females aged 20-24 years have a prevalence as high as 7.5% compared to their male counterpart with a prevalence of 3.5%.

The WHO30 categorised the mode of transmission of HIV in adolescents and young people in two ways- vertical (mother-to-child) transmission or horizontal/sexual transmission.

According to an estimate, globally, about 90% of HIV positive adolescents acquire the infection perinatally31. In Nigeria, vertical transmission of HIV is the second most common mode of transmission of HIV after sexual intercourse27. Despite the contribution of perinatal infection to the incidence of HIV infection in adolescents and young people, it is seldom studied by the scholarly community and its impact remains unknown.

Sexual transmission of HIV is the second most common route of HIV transmission in young people. It accounts for about 50% of the 35.3 million under 25 young persons living with HIV32.

Early sex initiation is a factor which increases HIV vulnerability in adolescents and young people. Recent estimate suggests that 15% of young persons start having sex before the age of 15 years33. Another important driver of early sexual debut is child marriage. Girls as young as 15 years are given away in marriage and give birth to their first child before 18 in some parts of Nigeria35. Furthermore, the very low knowledge of HIV status among young people in Nigeria may be a huge contributing factor32

Condom Use and Contraceptives

The prevalence of condom use among adolescents and young people in Nigeria is low36. Data from the National HIV and AIDS and Reproductive Health Survey (2013)37 show that 56.4% of adolescent boys and 39.6% of adolescent girls had unprotected sex with their partners. What is striking about these figures is that more adolescents were engaged in this behaviour than other age groups in the study.

Evidence suggests that Nigerian youths have a high level of awareness of HIV/AIDS, especially with regards with prevention and care12-16. Studies showing a low level of awareness with regards to HIV/AIDS is uncommon17. These existing studies however fail to resolve the difference between awareness of HIV/AIDS and a comprehensive knowledge of HIV/AIDS. It is important to differentiate between these two because of the misconception about HIV/AIDS that is common. A 2015 UNICEF report23 shows that only 34% of adolescent males in Nigeria have comprehensive knowledge of HIV, while only 24% of adolescent females have the necessary and accurate information on HIV. Statistics show an awareness-knowledge parity index of 0.39 in South East, 0.55 in the North-West, 0.91 in the South-West, 0.67 in the South-South and 1.49 in the North-Central.20 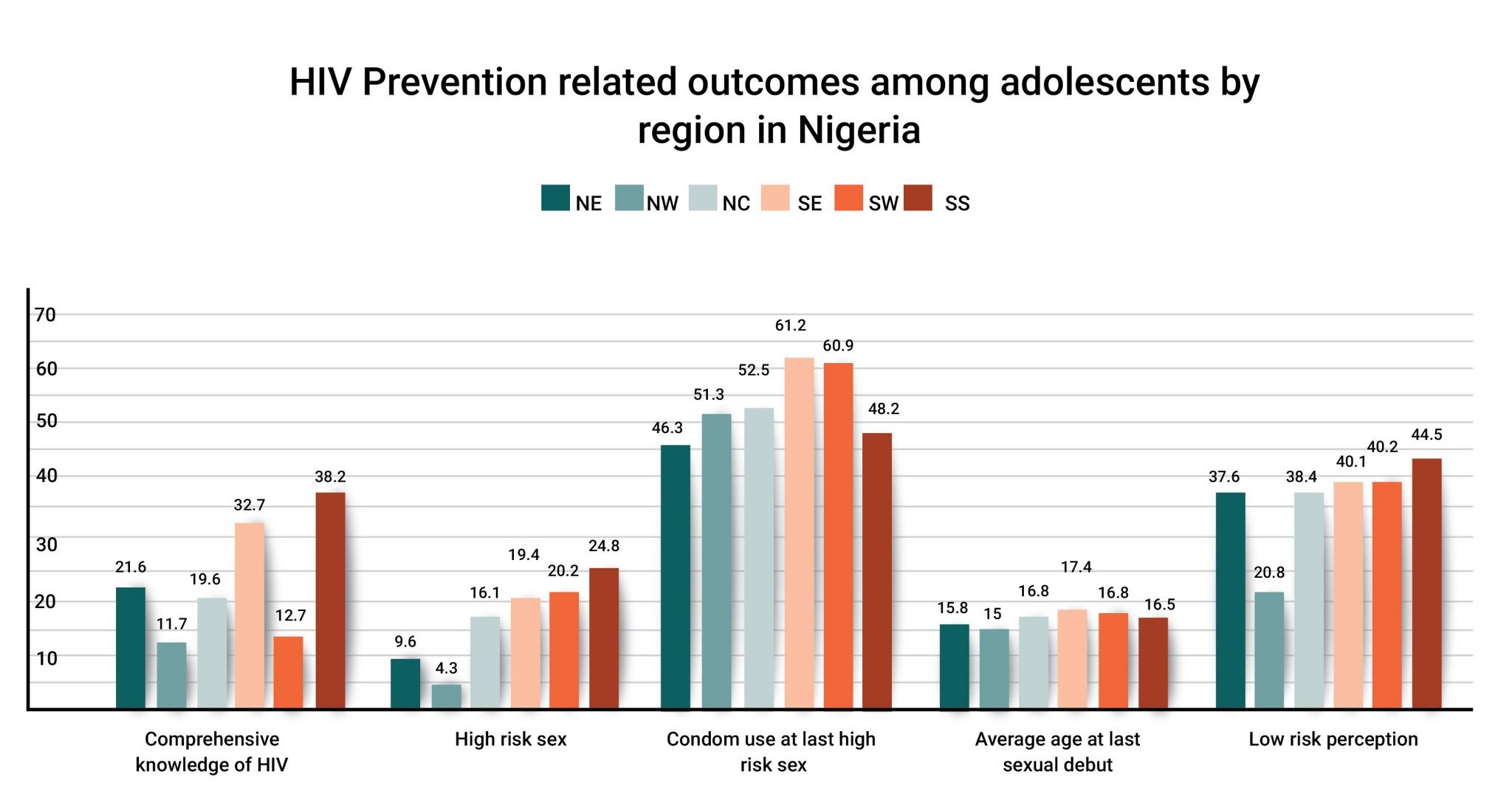 Most HIV/AIDS school programs rely on education and behaviour change programs. Even though these programs help provide awareness and comprehensive knowledge on HIV/AIDS, there is a growing body of evidence that suggest they are weak in controlling risky sexual behaviours 18,19,20,21,22. These can be seen in studies that have shown increase in the sexual activity of adolescents,24-26 and decrease in the utilization of condoms and other contraceptives 21-23. Some studies have shown that the disparity between knowledge and behaviour may be responsible for the lingering spread of the disease in Nigeria38-41. This view is supported by Smith who argued that “the disconnect between young people’s knowledge about HIV/AIDS and what they do results because risks is constructed on the foundation of ethics and morality which is usually interlaced with morality shared on the community level and subjective assessment of ethics of personal behaviour”42(p. 345)

Addressing the HIV epidemic in adolescent and young people

The World AIDS day which is held on 1 December every year presents a unique opportunity and a challenge for everyone to unite in the fight against AIDS. Young people are the key and need to be engaged in order the stem the tide of the HIV/AIDS epidemic43. In Nigeria, although a national strategic plan to address HIV/AIDS in adolescents and young people exists, young people are rarely engaged, and some key populations are marginalised in these strategic plans.

EDITING AND GRAPHICS
BY
HEALTHTHINK TEAM