Adolescence is a critical period of development for young people that is usually marked by many psychological, physical and social changes (‎1). This phase of life also presents with fatal and life-threatening health risks due to risky behaviours. According to World Health Organization, nearly 35% of the global burden of disease has its roots in adolescence (‎2).  Engagement in risky sexual behaviour, for instance, is due to the fact that majority of the adolescents tend to assume independence, however, lack the information and self-confidence to make informed decisions about their sexuality (‎3). These high risk sexual behaviours predispose them to various reproductive health issues which majorly affect girls such as early child bearing, sexually transmitted diseases (STDs) including HIV/AIDS, unsafe abortions and maternal mortality.

Among female adolescents (15-19 years), maternal deaths due to unsafe abortion and childbirth complications such as maternal haemorrhage is a leading cause of death resulting in about 25,000 deaths yearly (‎4), second only to self-inflicted injuries. While childbirth complications are more prominent among adolescents due to immature body physiology to cope the process, babies born to these young mothers also tend to be at high risk of mortality within few weeks of birth or suffer health risks such as low birth weight which could have long term implications on them in later life.

Most pregnant adolescents resort to abortion due to the fact that majority of the pregnancies are unintended, as they are usually due to sexual violence, social pressures (‎5) and in cases where they are intended are due to early and forced marriages. It has been observed that sexually active unmarried adolescents do not seek to become pregnant, and a majority of their married counterparts do not wish to become pregnant at an early age or in cases where they already have a child, prefer to delay the next pregnancy (‎8). Adolescent pregnancy also poses a threat to the girl-child education and thus limits her chances at life opportunities in later life; a phenomenon which takes its toll on her child, thus maintaining the poverty cycle. 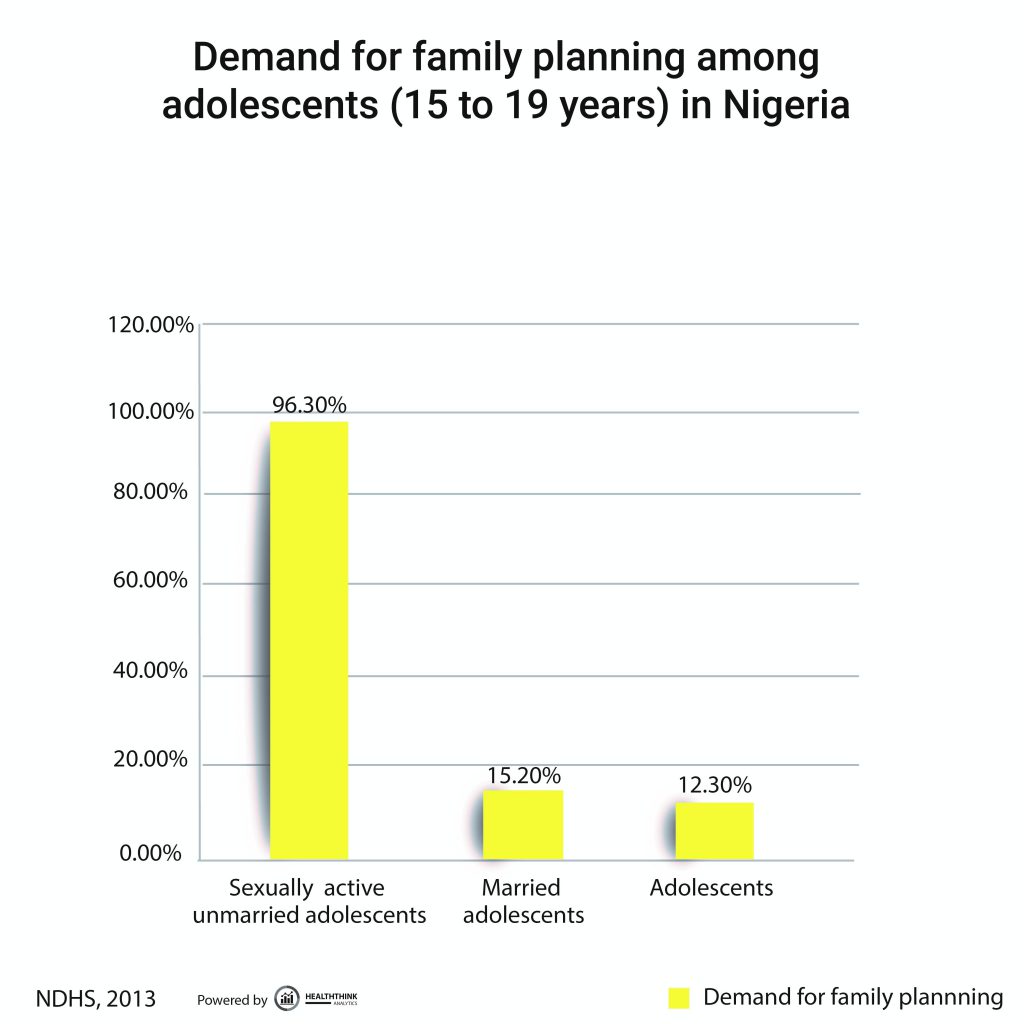 One major way to avoid unintended pregnancies and its associated risks is through the use of contraceptives. About 33% and 10% of maternal deaths and infant mortality globally can be prevented through contraception (‎9). Elimination of high risk pregnancies in sub-Saharan Africa can reduce maternal mortality by 25% (‎6) and could also help in addressing increasing population growth in spite of limited resources. 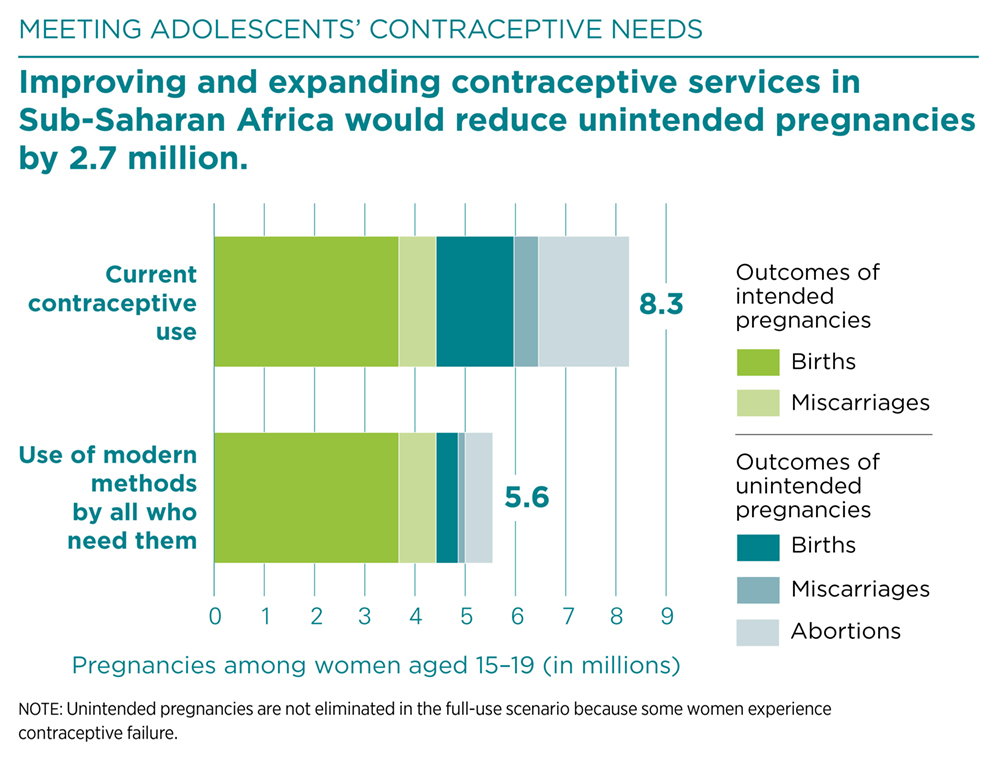 In recent times, there are a variety of modern contraceptive methods such as pills, injectables, implants and barrier methods i.e condoms. These methods have proven to be highly effective compared to the non-conventional traditional methods (like withdrawal, rhythm and calendar methods) in preventing unwanted pregnancies due to their low failure rates and minimal side effects (‎10). Asides the importance of contraceptives usage in the prevention of unwanted pregnancies, the barrier method (condoms) is also effective in prevention of sexually transmitted infections such as HIV/AIDS; the second most common cause of deaths in 2012 (‎11) among all adolescents and with adolescent girls being disproportionately affected.

Despite their usefulness, contraceptive usage is generally low in most developing countries including Nigeria; with high unmet need for family planning among sexually active women (‎12). It is estimated that the contraceptive prevalence among women in Nigeria is 16% (12). Among female adolescents, 15-19 years, the rate is remarkably low as only 6% of them were estimated to be using any contraceptive method, while only 2% of the currently married compared to 61% of the sexually active unmarried adolescents were using any contraceptive method (12). The proportion of total unmet need for family planning (for child spacing) among sexually active married adolescents was also reported to be higher (35.3%) than for women in any other age group (12). 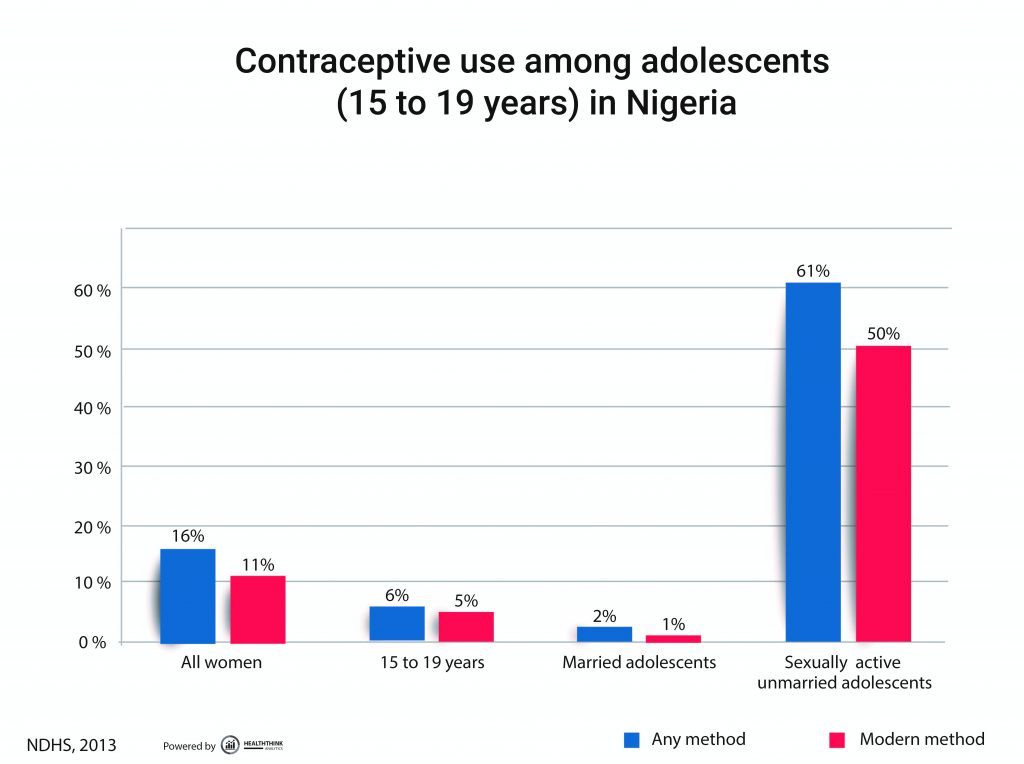 Barriers associated with access to contraceptives among adolescents include discrimination, cost, inadequate knowledge and societal pressures. Adolescents are victims of discriminatory reproductive health service provision including contraceptive services. Service providers often do not provide adolescents with adequate information on contraception and could also restrict their access to mostly condoms due to personal bias against having premarital sex (‎13).

Owing to its relative easier accessibility compared to other contraceptives for reasons stated above and for its cheaper cost, condoms are the most commonly used modern contraceptives among adolescents (13). A major concern with condom use among adolescents however, is its inconsistent use. Inconsistent use is a common challenge with most short term contraceptives including pills and injectables, which may result in failure to avoid unintended pregnancy. With adolescents, consistence in condom use decreases over time as sexual partners become more stable and as sex becomes more irregular and unpredictable (13). Also, as identified in a study among South African teens, poor knowledge of how a contraceptive method works could also result to wrongful usage or having misconceptions about such methods (‎14). An adolescent in the study claimed that she sometimes decides to take her contraceptive pill after sex if she forgets to take it before.

In order to achieve the sustainable development goals 3 and 5 which focus on universal access to sexual and reproductive health and rights, and gender equality (‎15), non-discriminatory access to contraceptives must be scaled up. Contraception is also vital to the remaining 15 goals as it would not be possible to end poverty and hunger (goals 1 and 2), ensure quality education for all (goal 4) and promote sustained economic growth (goal 8), if every woman including adolescent girls do not have access to quality, rights-based family planning services (15). One of the global commitments to achieving this goal is the FP2020, a global partnership that supports the rights of adolescent girls to decide, freely, and for themselves on available contraceptive choices using non-discriminatory approaches (‎16). With Nigeria being one of the FP2020 focus countries, it is believed that Nigerian adolescent girls will not be left out of 120 million additional women and girls targeted to have access to rights based family planning services and supplies by 2020 (16).

As the world celebrates this year’s world contraception day, focus should be on scaling up contraceptive uptake and access to different contraceptive methods among adolescents. Firstly, all adolescent girls, irrespective of marital status and sexual activity, must have access to curriculum-based, age-appropriate sexuality education. This can be achieved via advocacy on diverse media platform including through parents, peer groups, school teachers, mass and electronic media. Service providers should be trained and encouraged to avoid denying them of their right to receive comprehensive and confidential information on pregnancy prevention which abstinence, delay in sexual initiation and contraceptive counselling and services in order to make informed decision on contraceptive choice. Contraceptive information, counselling and services should be devoid of service provider’s bias, so as to encourage uptake of Long Acting Reversible Contraceptive (LARC) methods which are highly effective in pregnancy prevention. Emphasis should also be place on the dual usage of condoms and other contraceptives especially LARCs, in order to prevent STI/HIV infections which pose a huge threat to adolescent girls.

Furthermore, advocacy efforts need to be intensified by government, policy makers and other stakeholders to make contraceptives more affordable to adolescent girls. Global partnerships such as FP2020 can be leveraged upon by government at all levels to subsidise cost of LARCs; a major challenge with uptake among adolescents. Adolescents in rural communities should also be given priority in contraceptive interventions. This is because, though, they have higher fertility rates compared to those in urban areas; their unmet need for family planning is twice as high (‎12). Also, the wide gap in contraceptive prevalence between sexually active unmarried adolescents and the currently married ones need to be bridged. Unmet need for family planning in the latter group can be addressed through wide access to quality, rights-based sexual and reproductive health services. 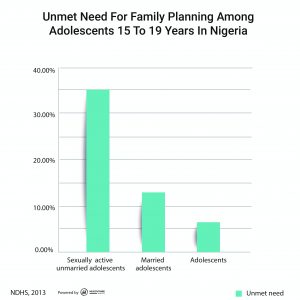 In order to track progress of interventions targeted at adolescents, stakeholders involved must ensure availability of quality data, appropriately disaggregated by sex, age, geographic location, income, marital status, sexual orientation, gender identity and other relevant criteria. This will enable decision makers such as governments and donor agencies to easily identify gaps in service such as availability, acceptability and quality among particular group e.g adolescents and respond effectively.

IS THERE A ROLE FOR TRADITIONAL BIRTH ATTENDANTS IN COMBATING MATERNAL DEATHS IN NIGERIA ? Pneumonia in Children Under-Five in Nigeria